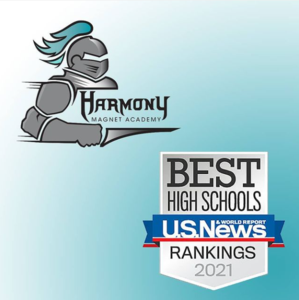 Out of 17,860 public high schools the publication ranked, U.S. News and World Report ranked Harmony No. 725, which places it in the top four percent in the country.

Harmony Magnet Academy principal Jeff Brown took it in stride when it came to the school being named among the top four percent of high schools in the country.

“That's not bad,” Brown said. Brown actually knows what an honor it is for the school to be named among U.S. News and World Reports 2021 Best High Schools. “It's an honor to be mentioned nationally,” Brown said.

U.S. News received AP and IB data directly from the College Board and International Baccalaureate, respectively. The state assessment data and graduation rates are from each state, and other data comes from the U.S. Department of Education Common Core of Data.

Six indicators of school quality was used to determine a school's score such as reading and math proficiency. In its overview of Harmony, U.S. News stated students have the opportunity to take Advanced Placement coursework and exams as the AP participation rate at the school is 69 percent.

U.S. News also noted the school's total minority enrollment is 78 percent and that 64 percent of students are economically disadvantaged. In addition, U.S. News noted Harmony has a graduation rate of 98 percent.