Pass And Review: PMA ceremony has it all 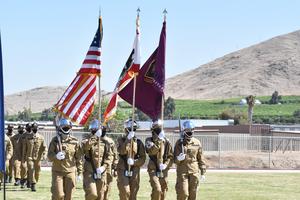 The Porterville Military Academy Ceremonial Review held Friday morning had it all – bugle calls, marching music, the awarding of honor ribbons and bars, eighth grade cadets advancing to ninth grade, and a change of command ceremony.

With first-year Cadet Abigail Stevenson serving as master of ceremonies, the program was called to attention with a bugle call. Stevenson offered amusing and factual history bits and explanations of the actions of the program.

Following the posting of colors, Captain Dave Archer introduced Smith, who had an extensive list of awards and honors, including responding to the attacks of 9/11 and the devastation of Hurricane Katrina in 2005 and Hurricane Maria in Puerto Rico in 2017. Smith is also the recipient of a Cadet Medal, which is the cadet equivalent of the Congressional Medal of Honor, given for saving life or property.

Smith spoke to the cadets about leadership skills and offered a few key lessons he learned along the way.

“Barking orders is only a very small part of what a leader does. Good leaders know that a request, a suggestion, or positive feedback are often the most power tools in their toolbox to influence those whom they seek to lead,” he said.

Smith, who said he became a cadet at age 12 while in junior high school, offered advice to new leaders about making decisions, taking risks, and giving direction.

“Failure is sometimes a very valuable part of your process in growing as a leader. Don't let it defeat you, but rather learn from it and adapt,” Smith said.

Courage, competency, effort and tenacity, ethical conduct and manners are all the ingredients for being a successful leader.

“There is no magic in success, and I don't believe in 'natural leaders,'” Smith said. “Leaders are not born. Leaders are forged here.”

The program continued with the presentation of the Principal's Citation Ribbon.

The awards were followed by the academy's eighth graders' acknowledgement advancing into the ninth grade, with Cadet Second Lieutenant Roberto Lozano sharing some of his experiences with his fellow eighth graders.

“No matter what the future holds, we will all have these shared experiences at PMA and in the Cadet Corps. It's now time for us to train the next batch of cadets,” Lozano said.

The Change of Command ceremony followed.

“Each year, Porterville Military Academy will select a new Regimental Commander,” Stevenson said. Cadet Captain Johnny Navarette is the out-going commander and filling in for him was Cadet Captain Ashley Santizo. The incoming commander for the 2021-2022 school year was introduced as Cadet First Lieutenant Elijah Mauck.

The passing of the unit's colors proceeded with Stevenson explaining each step along the way before inviting Mauck to speak to his new command.

Mauck walked to the microphone and had 11 words: All current policies and procedures shall remain in place. Thank you.

The last segment of the ceremony was the pass in review, which dates back to the times of the earliest armies of the world, Stevenson said.

“They are an opportunity for leaders and the public to view the discipline, proficiency, morale and esprit de corps of the assembled troops,” Stevenson said. “Today the Porterville Military Academy continues this time honored tradition.”