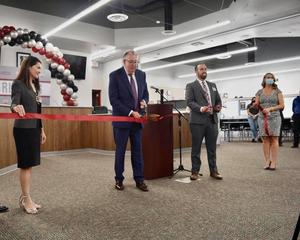 “Throughout my four years in the Law, Justice and Ethics Pathway. I had numerous opportunities to expand my knowledge as well as gain important college and career readiness skills,” said Chloe Ross, a LJE Class of 2021 alumni after welcoming everyone in attendance to the grand opening of the Center.

“The opening of this building is going to further expand the opportunities for future Law, Justice and Ethics students. Where we stand today stems from the first graduating class of LJE in 2015, and it will go far beyond the 99 students we have in our freshman class this year. The LJE staff could not be more excited to utilize the state-of-the-art courtroom and forensic lab with our students, this year and for many years to come.”

But none of it could be possible without Porterville Unified School District Superintendent Nate Nelson, LJE Advisory Board Chair Robert Dempsie, Director of Pathways Cindy Brown and Granite Hills High School Principal Jake Bowker, she said as she introduced one by one to the stage.

“This is the culmination of many years of work,” Nelson said and explained a bit about Proposition 51 and the $6 million project.

The CTE Justice Center and Forensic Lab were among the first awarded, he said, due to the system, people, and the commitment of pushing the project to the top.

“It's such a wonderful day. Tremendous day to see this building come to life,” Dempsie said before acknowledging advisory individuals. “I'm excited. I'm standing at center point, the well, of this building — the only high school campus in the State of California to have a court room center.”

Brown offered a bit of the Law and Justice Pathway history, dating back to 2010.

From the beginning, she said, the program has been one of the most popular pathways.

“It's amazing to see what it is today,” Brown said. “This is a replica of real-work space and that brings lessons to life, builds confidence and pride to our students, staff and advisory board. The dream has become reality and we're in it right now.”

Bowker said he was honored and humbled for the amazing opportunity.

The program was followed with student-led tours of the forensic and other labs with explanations about studying about DNA and fingerprinting in the Fume Hood Chemistry lab.

“Before you go, we would like to say one final thank you to everyone in attendance for their support. None of this would be possible without your help,” Ross said. “We have big plans and a bright future ahead of us for our students in the Law Justice and Ethics Pathway and we are thrilled to utilize this building for many years to come.”

Tulare County Supervisor Dennis Townsend said he remembers when the Pathway programs were only a thought, and was amazed to see it began shortly after.

“Just watching students grow and seeing the opportunities they have in this community is incredible,” Townsend said.

Praises were heard numerous times through the day.

“This is amazing,” said Eric Coyne during the program. “This has grown into a Statewide model. It's a pleasure to be here to see what you've done.”