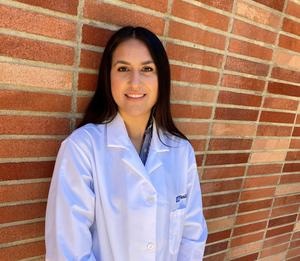 “Lorna Mendoza continues to impress us in her path as a graduate and now pursuing her PhD at UCLA Medical School. As a former Academy of Health Sciences Pathway graduate, she models a remarkable confidence and deep knowledge as she finalizes her thesis research."

The daughter of Maria Hermelinda Quintero and Rigoberto Quintero, Lorna Mendoza, was a Porterville High School athlete and scholar before she became a biology major graduating from UCLA in 2021.

Mendoza also received an array of honors and awards in sports, including being a Cross Country Scholar from 2013 to 2017, and named Cross Country Most Improved Player in 2014. And, following in the steps of her sister, she was active in wrestling.

Her coach, Tim Vanni, said he remembers a quiet girl who was always extremely focused.

“She’s one of the good ones. She had a lot of ambition and really focused,” Vanni said. “She excelled in academics and sports. Obviously, coming from Porterville, she had plans at the back of her mind that she didn’t tell us about because she was always focused with whatever she was trying to achieve.”

Mendoza said she picked UCLA because it offered the best financial package.

“UCLA was also always a dream school of mine but I mainly chose UCLA because I always knew I wanted to be in the medical sciences and the STEM (Science, Technology, Engineering and Mathematics) education here is outstanding,” Mendoza said. “The level of diversity at UCLA also made me fall in love with the school more.”

“Lorna Mendoza continues to impress us in her path as a graduate and now pursuing her PhD at UCLA Medical School,” said Cynthia Brown, director of PUSD Pathways. “As a former Academy of Health Sciences Pathway graduate and standout wrestler at PHS Class of 2017, she models a remarkable confidence and deep knowledge as she finalizes her thesis research. On behalf of the PUSD Pathways program, I congratulate Lorna in all her endeavors.”

The early exposure lessons and opportunities linked to the industry in the PUSD Pathways program provides the springboard for students like Mendoza to be at an advantage and be a leader in pursuit of a successful college, career and life-readiness path, Brown said.

Following graduation from PHS and the Pathway program, Mendoza said she was a Biology major as an undergrad before graduating from UCLA and chose her research thesis after she first-hand witnessed the impact Diabetic Kidney Disease (DKD) can have and wants to help make the symptoms of kidney disease more bearable.

“I chose my area of study because kidney failure is a major diabetic complication,” Mendoza said. “I first-hand witnessed the impact that diabetic kidney disease, DKD, has on the life of DKD patients during a college medical internship with a nephrologist in Porterville,” Mendoza said. “After observing the devastating complications associated with DKD, I wanted to contribute to medical research working towards (explaining) the molecular architecture driving kidney disease and alleviating the symptoms arising from kidney disease.”

A portion of the research the Hevener laboratory focuses on is studying the connections between hormone levels and metabolic function to better understand metabolic syndrome, Mendoza said.

“My research focuses on studying the cellular mechanisms impacting kidney function and disease pathobiology in the context of type 2 diabetes,” Mendoza said. “The main aim of my research is to (explain) the hormonal pathophysiological mechanisms driving kidney function. I hope that by having a deeper comprehension of the physiological pathways underlaying hormone regulation of kidney homeostasis I am able to contribute to translational medicine for patients suffering from diabetic kidney disease.”