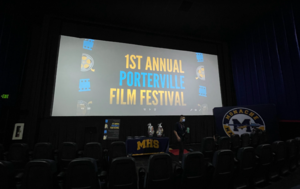 The Paparazzi was out in full force at the first Porterville Film Festival presented by Monache High School's Multimedia and Technology Academy (MTA).

The Paparazzi was out in full force Wednesday evening at the first Porterville Film Festival presented by Monache High School's Multimedia and Technology Academy (MTA.) The festival will be an annual event.

Sponsored by Galaxy Theatres Porterville, the competition was open to all middle school and high school students in Tulare, Kings, Kern and Fresno counties.

In all, more than 50 teams registered for the event.

But by the end of the day, it was the Kern High School District's Regional Occupational Programs that walked away with the First Place win for their film, “The Smell that Reminds Me.”

KHSD also walked away with the third place win for “Moving On.”

“I could not be more excited for them. They worked really hard,” said Lisa Krch Olson, video production instructor. “I saw their skill set and creativity blossom on the big screen.”

And Alta Sierra Intermediate walked away with the middle school division first-place win for their film “A Case for Detective Nopbrainz.”

The program began with a welcome by Bobby Styles, festival director, and video production teacher for Monache's MTA.

“Our pathway is designed to give students the real-world experience of working in the industry of Arts, Media and Entertainment,” Styles said. “We are excited to have everyone here with us this evening, and we're looking forward to showing some of the incredible work made by students all over the San Joaquin Valley.”

Styles then thanked several students, advisors, and the Jury Team — which judged the festival films.

“They volunteered their time to watch and score all the videos,” Styles said. “More importantly they offered positive feedback and constructive criticism for each video.”

The comments will be shared with the filmmakers after the festival to help the students reflect on their work and improve their skills, Styles said.

“For this year's film festival, students were provided with a prompt and given two weeks to complete their videos,” Styles said. “This limited amount of time was intended to give students a hint of real-world situations they might encounter in the film industry; famous or infamous for its fast-paced nature. Over 50 teams registered for this event and tonight we will feature the top-scoring videos.”

The program began with the showing of 10 of the highest-scoring videos, which didn't win first, second or third in the high school entries, or first place in the middle school entry.

Numerous students made the program possible, including those working in the projection booth — Amandeep Singh, Tim Duran and Salvador Renteria.

Introducing the films and presenting some of the awards were Maria Hernandez Ocampo, Paris Munoz France, Yaritza Quintero Beltran and Esperanza Chavez.

Styles advised the audience to keep the prompt in mind — students had to film on campus at their schools, include an empty picture frame as a prop, and introduce at least one character through the sense of smell.

After the 10 films were shown, the audience voted via cell phone or by ballot using the honor system and voting only once. Styles once again thanked the Galaxy Theatre team for sponsoring the event, being “incredibly helpful and generous” and donating two lovely and big gift baskets for the two first-place winners.

And after tallying all the votes, it was Lemoore High School who walked away with the Audience Award.

Kurt Hardcastle, LHS multimedia marketing teacher, said it's always great to see the students eyes light up when they take the initiative and create something. It was a huge project, he said, and they will be pleased today when he tells them their work was appreciated by the audience.

“Congratulations to all the winners,” Styles said at the end of the program. “I hope you had a good experience and hopefully you can join us again next year.”

The festival came about after Styles spoke with other video production teachers in Tulare County and realized there weren't any film competitions in the first semester for their students.

“This is what motivated us to create this festival,” Styles said. “It gives the students in the Central Valley a chance to exercise their skills, and the event is designed to celebrate their creative accomplishments.

“We hope to enhance the festival each year, expanding it every time.”

Styles said he was grateful to the Galaxy Theatre for allowing them to host the event at their venue.

“They have been incredibly helpful and generous from day one,” Styles said. “I am also appreciative of all the members of the Jury Team that volunteered their time to score the videos and provide valuable feedback for their student filmmakers. This is truly a community event because it would not be possible without the help of numerous individuals.”