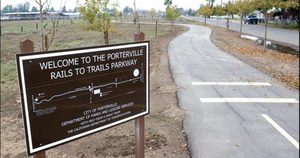 Twelve PUSD students from three different pathways in the district will work as interns in implementing the grant.

The Eastside parks and recreation corridor, or whatever you want to call it, continues to take shape. And Porterville City Manager John Lollis had this to say when it has come to the effort to fund that corridor:

“It's been a good run here in the last year,” he said.

The city has received  $3.61 million grant for improvements to the Rails To Trails Parkway, known now as the Santa Fe Byway. The Clean California grant will be used for a revitalization project along 1.3 miles o the trail from Henderson to Walnut Avenues.

The city's Community Development Department applied for the grant along with the Porterville Unified School District and the Tulare County Association of Governments applied for the grant. Twelve PUSD students from three different pathways in the district will work as interns in implementing the grant.

The grant comes after the City of Porterville Parks and Leisure Services received a $7.8 million grant for the development of a recreation center and park at Henderson and Fourth. Total cost of that project will be more than $10 million and Parks and Leisure has applied for a grant from the fedearl government's land and water conservation program to help fund the rest of the project.

The city also received a grant of more than $7 million for the development of the Butterfield Stage Corridor, a nine-mile trail from south Porterville to Strathmore.

The Santa Fe Byway project will be part of an entire Eastside corridor that will go from Henderson to Orange. Along with the park/rec center on Henderson, the new library is set to be located between the Heritage Center and Olive. Lollis said the city is also applying for a $10 million grant that will help fund the construction of the new library.

The city is also developing an athletic center with several mini arenas for a variety of sports the city is calling the only one of its kind in the Valley adjacent to the Heritage Center. And the city has already applied for another grant that could even add more mini-arenas to the facility. And Lollis said the city will apply for another grant to make additional improvements to the Rails To Trails as well.

And there's the new Sequoia National Forest headquarters that's coming to Morton. Lollis said as part of the Santa Fe Byway there will be landscaping that will have a forest them to go along with the headquarters.

The revitalization of the Rails to Trails Parkway know as the Santa Fe Byway will include replacing dead trees to cut down on heat; solar lighting, fencing, improved safety features, efforts to reduce trash along the trail, playground and outdoor fitness equipment promote physical activity; covered bench seating; a large picnic shelter; drinking fountains; and a bicycle repair station.

The project will also include improvements to the paved portion of the trail from Henderson to Olive. There will be drought tolerant landscaping to improve soil stabilization; educational signage; graffiti removal; and there will be two public areas for art displays.

Among their task will be to design the signs for the trail and coming up with an outreach, educational program to promote use of the trail, physical activity and keeping the trail clean. The state said the project will improve an underutilized trail that's within 1/4-mile of five underserved communities.

PUSD Pathways Director Cindy Brown said the project will allow students to work with city and other professionals on the project. She said the project serves the community's residents by beautifying the area, promoting healthy living along with education opportunities.

“I'm so pleased and grateful our city thought of our students,” Brown said. “It's a great example of civic engagement.”