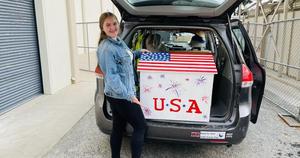 Monache MCTA Cabinetry and Woodworking teacher Tim Newby gave 14 students a choice between making night-stands for themselves or Library-Junctions for their community. Eight of the seniors in the Project Design and Manufacturing Cabinetry class chose the latter.

Monache MCTA Cabinetry and Woodworking teacher Tim Newby gave 14 students a choice between making night-stands for themselves or Library-Junctions for their community.

Eight of the seniors in the Project Design and Manufacturing Cabinetry class chose the latter. Thanks to them, the 100 Porterville Library-Junction Initiative is now closer to its goal.

The funding for these five MCTA PLJs came from two veteran, respected retired educators:  Leila Burns and Janet Ecobiza Baker of Westfield Elementary.  Both Burns and Ecobiza have been integral in the PLJ’s ongoing success.

It was Burns from her new home in Austin, Texas, who sponsored her team’s PCR PLJ (The 10th of the first 10 PLJs). It was Baker who conceived of the first PLJ in memory of Porterville Fire Captain Raymond Figueroa and Firefighter Patrick Jones.

Burns additionally inspired her family, the Iaconas of New York, to donate $100 toward constructing more PLJs. Ecobiza matched their generosity by purchasing two exterior-quality sheets of 4’ x 8’ plywood at around $60 apiece.

The students used these donated materials and the $100 to design and construct five “double-wide,” two-door, shed-style, two-level PLJs. View these Library-Junctions in person today: They're on display within the recessed porch of the former Lloyd’s Funeral Home across from the Porterville Post Office on Mill.

The impetus for this all was the fire that destroyed the Porterville Public Library on February 18, 2020.  Figueroa and Jones were killed in their efforts to ensure no one else was hurt or worse. There was no one else who was hurt.

In response, the Porterville Library-Junction Initiative was created. Its mission is to inspire people to establish 100 “little libraries” in and around Porterville. Each PLJ serves as a memorial to Raymond and Patrick, while the whole constellation of PLJs serves as a semblance of a public library.

Porterville Library-Junctions are either built “from scratch” or purchased already made. They are self-financed by individuals or groups.

PLJs are microwave-sized boxes, often placed on the end of a four-by-four (as a mailbox might be) and placed on private property, but accessible to members of the book-loving public. The rule is for every book taken out, patrons have to replace that book with one of equal or greater value. PLJs never are depleted.

Each PLJ has a handsome brass plaque in honor of Raymond and Patrick. The first 100 of these are being donated by Richard Eckhoff, of Springville.

These MCTA PLJs are extra special. Not only are they made by up-and-coming cabinetmakers, but most, if not all, of the supplies were purchased locally, too. The Iacona family paid for the synthetic glass. Newby supplied hardware he had on hand.  Ecobiza provided the plywood. The kids provided the knowledge and skills.

These MCTA PLJs are larger. They have twice the volume of the premiere PLJ on Carmelita, and at least four times the volume of one of Jim Fox’s honor-vend-racks. They will require a commensurate support structure. The PLJ recommends something that supports them from each of their four corners.

They did the design, layout, cut-out, dadoes, rabbets, angle for roof, assembling, putty, sanding, cutting out face-frame parts, assembling with pocket holes and attaching to cabinet, constructing doors for glass and installation of the hardware.

Many of the MCTA students have learned about and used these skills on required shop projects and their senior projects.

Asked how he was able to keep his shop students busy during quarantine, Newby answered, “During the pandemic and remote learning, I created many instructional videos on woodworking tools, wood joints, safety, machinery, etc. for the students to view and learn from. I also developed a birdhouse project. The students picked up the parts and a tool box and assembled the birdhouses at home.”

These are unfinished PLJs. Time-and-money-constraints didn't allow the students to add roofing material, caulking, or paint. Purchasers will have to arrange their own painting, roofing, support system, caulking, and installation at a cost of about $120.  So, while they haven’t gone through their upgrades, they're available as is.

One-hundred-percent of the proceeds from the sales of these PLJs will be placed into the PLJ account at Weisenberger’s Ace Hardware. Newby respectfully declined the PLJ’s offer of 50 percent  of the proceeds to help his department defray costs. Thanks to Newby and PUSD, all monies will be folded back into producing more PLJs.

The PLJ is compiling rosters of makers to augment the PLJ Initiative. It's developing a list of artists who wish to paint PLJs for curators who want to provide their structures as the canvas. Compensation will be negotiated between the curator and the artist.

Another list is composed of builders who can build, or complete (if necessary) or install PLJs for those who don't have the skills, time, or tools to do so. Those who know someone — or ARE someone — who would like to be considered for one or all of these rosters, contact PLJ at [email protected] or call or text (559) 779-4821.

One of Newby’s students actually went above and beyond what was necessary: Kyleen Mitchell designed and painted one of the five in patriotic colors. This includes the U.S. flag on the top, fireworks on the back exploding around the bold initials U.S.A.  On one side is depicted a painted patriotic quilted flower, while the other side is spangled with stars bleeding in red and blue. One shelf is painted “Old Glory Blue” and the other is in “Old Glory Red.”

All this work — including the work accomplished on the night-stands by the others — has honed all these students’ cabinetry making skills.  Some of them, including Mitchell, are planning on putting these skills into action at the upcoming SkillsUSA State Competition in April.

This will be Mitchell's second time at the state level event.  This time though, she knows she's even better equipped than before —with the tools PUSD MCTA and Tim Newby has given her — so much so she visualizes herself going to the nationals in Georgia.

Visit the Porterville Library-Junctions for inspiration and good reading. Their locations are all viewable via the Google Map link https://tinyurl.com/PTV-PLLs.Finally, join the PLJ on Instagram at Porterville_Little_Libraries