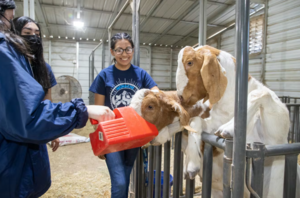 Princesa Ceballos tracks her schedule in a planner. For the high school junior who lives in California’s San Joaquin Valley, a typical weekday looks something like this:

Wake up by 6 a.m. Drive to school by 7 a.m., to trim bushes, clean rocks and dig holes for a group landscape project. From 8 a.m. to 9:30 a.m., practice showmanship with the goat she’s raising to sell. Drive home to take a test for school from 9:30 a.m. to 11 a.m. Until noon, prep for a tennis match. Drive back to school to feed the chickens and practice a script for an end-of-year banquet. Drive to the tennis courts for a doubles match at 3 p.m. From 4 p.m. to 6:30 p.m., have dinner with teammates. Head home, shower and do homework until 9 p.m.

Then, finally, until her bedtime at 11 p.m., Princesa rests—while looking at her phone.

“I am someone that really likes to get involved with extracurricular activities. I like to put myself out there,” Princesa says. “Although I am a little bit shy at times, I do want to make sure that I’m giving myself those opportunities to grow and expand as a leader.”

Princesa moved to the U.S. from Mexico when she was 3 or 4 years old. Her father works in the fields, picking oranges, lemons, grapefruits and mandarins.

“They were both the first in our family to go to college, so they were a big inspiration,” Princesa says. “And I think that’s why I’m so inclined to go to college and feel like that’s something I want to do—because they were able to do it.”

She has her college picked out: California Polytechnic State University at San Luis Obispo. She appreciates its small class sizes, its motto—“learn by doing”—and its campus near the beach. Her planned major: environmental science, with a minor in agricultural business. She even has her career selected: agronomist—a soil scientist.

“I want to be able to get my bachelor’s and my master’s and eventually my doctorate degree, even though it’s really expensive,” Princesa says. “Especially being a woman in, possibly, a STEM field, I think I want to be able to motivate others—once I do graduate—younger than me to pursue those types of careers.”

As a 17-year-old club leader and community-service volunteer and livestock farmer and science intern and athlete, there’s one activity that Princesa hasn’t figured out how to squeeze in, except for during those few moments before bed—rest.

“Some of the things that I really struggle with are my mental health, for the reason that it’s very difficult to balance so many different activities that I do,” she says. “I have all straight A’s right now, but it’s very hard to keep those grades.”

She also puzzles over how to thrive in the U.S. while staying connected to her Hispanic culture.

“Being able to love both parts and embrace both parts,” she says, “is something that I try to continue to work on.”