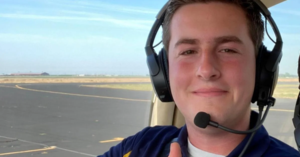 "It’s truly a remarkable experience to get a pilot license before graduating from high school.”

With a goal of turning his passion for aviation into a career, Porterville Military Academy Cadet Brady Unruh will have the opportunity to do something rare and unique this summer — attend an eight-week Air Force Flight Academy summer aviation training program and earn his private pilot certificate.

"It’s truly a remarkable experience to get a pilot license before graduating from high school,” said PMA Principal Doug Ihmels about the high school junior.

PMA Commandant Fred Dohnke paraphrased the uniqueness of it.

“He’ll be flying an airplane when most kids are not even driving a car yet,” Dohnke said.

The opportunity is something youth his age only dream about, but through the Porterville Military Academy, that dream is turning into a reality. A testament, Ihmels said, to Dohnke and Porterville Unified School District Aviation Pathway Lead and instructor Minervo Ramirez, who have worked hard for Unruh to get the opportunity.

“His qualifications ultimately got him selected,” Ihmels said. “He does well in all aspects as a cadet and student. He’s a great representative of Porterville Military Academy.”

“He has demonstrated success with the Cadet Corp program and aviation program,” Dohnke said. “He carries a 4.0 grade point average, which makes it easy for us to recommend him. He did the hard work. Who he was, earned him that.”

It's not easy to be accepted into such a program.

“It’s a very difficult program to get into. They only accept 60 non-ROTC cadets from the entire country — and he is one of them,” Dohnke said. “He was our No. 1 recommendation and selected based on his performance. A lot of credit goes to Mr. Ramirez. This is the result of Ramirez’ efforts and Pathways efforts at Porterville Military Academy.”

Originally, Unruh was recommended for a three-week program — which accepts an approximate 200 students.

“When I signed up, it had this small box asking if I would be interested in an eight-week program. I looked at it and thought, 'why not?' and I checked off the box not thinking anything of it. But my application was for the three-week program,” Unruh said about his application which was due in early December.

Then during Christmas break, Unruh received an email saying he had been accepted into the eight-week program.

“I was on the couch and at first I thought it was a scam,” Unruh said. “I showed my mom and she started freaking out. I still can’t believe it. It hasn’t fully sunk in.”

But it will soon. Unruh’s last day of his junior year at PMA is June 3. He leaves for Nebraska on June 6.

“It’s a great school and an intense program,” Dohnke said. “Most people take six months. He is doing it in eight weeks. Most take 60 (flying) hours. He is doing it in 40, probably. This kid is going to be a somebody. He will be the first pilot at the school — a student with real aviation experience. When he gets back, he can take a plane out on his own.”

Unruh said he practices on the flight simulators on campus. And Dohnke said he was impressed when he flew with Unruh as the pilot recently on a flight back from Delano.

“My grandpa is a private pilot so he’s super excited for me,” Unruh said.

His mother, Bethany Unruh, said she encouraged him to fill out the application.

“I told him, what’s the worse that can happen?” she said. “Then on Christmas break he comes to me and calmly says, ‘This is weird,’” Bethany Unruh said, referring to the acceptance into an eight-week course in Nebraska instead of three weeks in Florida. “It was a different program from what he applied for. He asked, ‘Is this real?’”

That evening, Unruh emailed Ramirez to let him know he got into the program

“This was an even better opportunity. With the three-week flight camp the end result would not include a pilot license,” Ramirez said. “This is really cool. He’s the beginning of what we want to do here. Except (Unruh) got in on the first year he got into our program.”

And Unruh is proof what he has done is a possibility for others.

“He checked off all the boxes, his GPA, recommendations from staff,” Ramirez said.

And others will see the value in trying and doing their best, Ramirez said of the younger students as Unruh has served as Drill Instructor, Staff Sergeant, and Executive Officer.

Parents, Bethany and Brian Unruh, and his three siblings, are proud of him, Bethany Unruh said.

“He’s a good kid,” she said and then talked of his dedication to everything he does. “Ever since he was a little boy, he’s been good. He drove the Bobcat and learned to drive a stick shift since he was 7 years old. He’s always very calculated in all he does and he’s wanted to be a pilot for a long time. Both his grandparents — my father and his father’s side flew. He’s really driven and is a go-getter. He’s a really good driver. He likes to calculate everything out. I sure am proud of him. I know he’s going to go places and this will give him a boost.”

The flight academy is intended to inspire and encourage high school youth toward aviation careers. There's no commitment to the United States Air Force upon graduation. The scholarship program is a collaborative effort between the aerospace industry and the Air  Force to address a national pilot shortage. Currently, Boeing predicts an annual need to hire 6,000 civilian pilots a year for the next 20 years, with military needs pushing the number beyond 8,000.

“He will be a great representation of Porterville Military Academy and we are thrilled for the aviation program. This is the vision we had two years ago to get students through ground school. Now we are going to have our first pilot,” Ihmels said. “It’s a life-changing experience and shows others what’s possible here — a very specific place for kids to learn of aviation not available anywhere. Our simulators and Colonel Dohnke — all a very unique opportunity.”