Granite one of two schools in nation to offer stenography class 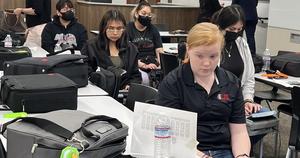 It's the “Best Career you’ve never heard of,” comes with a six-figure salary — and it's available at the Academy of Law, Justice and Ethics Pathway.

It's the “Best Career you’ve never heard of,” comes with a six-figure salary — and it's available in Porterville.

In fact, Project Steno’s Basic Training is only offered at two high schools across the nation — one in Massachusetts — and the other at Porterville Unified School District’s Academy of Law, Justice and Ethics Pathway at Granite Hills High School.

The program, a free hands-on introduction to steno, is teaching GHHS students the rudiments of machine shorthand theory. And with it, the possibility of offering the students who take the class and pursue the vocation, an opportunity to a career with travel, helping the deaf or hard of hearing, working in a court setting, ESPN or other sport venue, government office or program and the possibility of taking home a six-figure income.

It all began with a nationwide shortage of court reporters, said Court Reporter Lesia Mervin of Visalia. Mervin has been a court reporter for 42 years and is a past president of California Court Reporters Association, who also works in CART (writing for the deaf and hard of hearing,) Captioning (converting audio content into text displayed on a screen, monitor or visual-display system,) writes for the United Nations and is a motivational speaker.

As court reporters retire, there's no one to fill the need, she said. And because those who pursue a job after successful completion, now have an opportunity to do more than actual court reporting, there are now less and less individuals ready to fill the void of actual court reporters. In addition, parents encourage their children to attend a four-year university, not a vocational career path, and the student-loan process for vocational schools isn't always possible.

“That is when we decided as a group to develop a program,” Mervin said of the state association of court reporters.

Mervin said she had heard of a program in Massachusetts and she was interested in starting one in her home-town area.

It originally started as a program for military wives to offer them the opportunity to learn a skill they can take anywhere. If their husbands are transferred in the nation, or overseas, they can take this skill with them and obtain employment anywhere they go, said Mervin.

“That is why it was named ‘Basic Training’ and has a lot of military terms in it,” Mervin said.

Mervin said she had already decided she wanted to start and lead such a program in California when it all suddenly fell into place.

Approximately six weeks ago, during an Advisory Board Meeting, ideas for opportunities through the District Attorney’s office and court were discussed for the possibility of adding them to the pathway program when someone asked if there would be interest in adding a court reporting class to the LJE Pathway.

“All of us perked up and said, why not? Let’s go for it,” said school principal Jacob Bowker.

Everyone was all fired up and ready to offer the opportunity that would change lives, he said, adding he's honored to have the program taught at the Law Justice Ethics Academy.

“We saw a real need and partnered with California State Court Reporters Association to do this,” Mervin said.

Only in its fourth week of existence, the class already has the approximate one dozen students excited about their future.

“This six session class is one and a half hours long and when they are done, they will know every key and how to write it,” Mervin said. “Then we will teach them speed.”

And though it appears to be a female dominant career, that's changing since now male and female students can divert and use the program for Captioning — which is used by professional writers on all major sport networks.

“There are so many options,” Mervin said. “All we are teaching the first six weeks is just the machine — just typing a few words — teaching the keyboard.”

In six weeks, they will offer a second introductory class to another group of sophomores, Mervin said. It will be followed by a third group, also for six weeks. And by doing so, they can separate those who are really interested.

“We can see who is interested and who doesn’t try. Who is a natural and who struggles — and we hope to get a handful of good candidates from there,” Mervin said. “That’s our plan.”

She talked about finding a good group of students from the three sessions who would make excellent candidates for a September curriculum with a full program, including English, medical terminology and legal terminology.

“I want to work with the school developing the curriculum,” she said. “My dream is to go through the whole (program) and be done with it but it would be a huge step up if we can get the students halfway or three quarters of the way through the program. This is so exciting for a small town.”

The students can then enroll at a school, such as Bakersfield College, and complete the program on their own.

But for now, Mervin said she wants to get them interested.

GHHS currently has 16 court reporting machines at the school and the students who are in the class are excited about it.

They talked Wednesday about their interest in learning how to use the keyboard, learning new things, and the new opportunity it's creating. They were also excited, they said, learning of the salary.

“We are so thrilled to offer students the opportunity to get the skill for stenography if it is their chosen career path, or another skill to add to their resume,” said Cynthia Garcia Brown, director of PUSD Pathways. “It’s a Win-Win.”