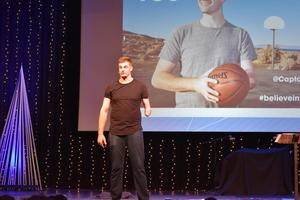 PUSD Pathway sophomores were challenged to “Believe in You” Friday by Kevin Atlas — the first player missing a limb to play NCAA Division 1 basketball.

It was all part of the 10th annual Porterville Unified School District Pathways Linked Learning Mentor’s Conference — an annual work-based learning event where students see, hear and learn from professionals or mentors who share their path stories, advice and guidance around hiring practices, as well as workplace effectiveness and the importance of building professional essential life skills that are significant in any career path they choose to pursue.

Atlas joked about his 6-foot, 11-inch height, his red hair, and his missing left, lower arm. Born missing one arm, Atlas also shared stories about facing adversity, including a split-custody household, falling behind academically and not being able to read in second grade, having ADHD, being dyslexic, having speech difficulties, being thrown into a special-education classroom, and being placed in counseling for anger-management issues, and of watching his father die of cancer at a young age.

He was tall in sixth grade, had red hair and only one arm, Atlas said as he talked and joked about never winning at Twister or able to clap his hands.

“I didn’t choose this,” he said as the audience of 892 PUSD sophomores appeared totally focused and captured by the stories.

“Go and change the world,” Atlas said. “I want you guys to be more successful than me. There are 7 billion people in the world but there is only one you.”

He advised the group to not apologize about being themselves and asked them to look in a mirror and say “I love you.”

“I am going to challenge you. Today is going to be a phenomenal day. You’re awesome,” Atlas said.

He then stated students don't grow in their comfort zone.

As Atlas talked, he interacted with the students, asking for show of hands and occasionally calling on students from the audience, taking a knee to be closer to the students, and walking out among them — hugging one student and her teacher.

Atlas stressed it takes only 21 days for the average person to rewire their brain.

“Spend a little time out of your day towards a good habit to set you closer to your goal,” he said after asking the sophomores about goals and dreams.

He challenged the sophomores to start with a positive affirmation in the morning, offer two hugs or compliments a day and to be kind.

“Twenty-one days. It costs you nothing,” he said. “Wake up and find your voice. Smile. Two compliments a day.”

The conference is mentor run and included the inspirational keynote speaker and alumni emcee, as well as various professional panels and breakout sessions completely facilitated by the district’s partners.

“This conference provides students with a professional conference experience to capture nuggets and apply to their skills-building repertoire — relevant and vibrant inspiration provided by passionate professional mentors who believe in empowering the future generation of leaders,” Brown said.

It was all a collaborative effort organized by the PUSD pathways department, high school site counselors, academy assistants and hundreds of professional industry partners, said Brown.

As the students headed to their respective sessions, and in between sessions, students stopped in the hallways to say hello, offer hugs, fist or nub bumps, ask for autographs or be photographed with Atlas.

“It was very exciting,” said Leticia Tapia after obtaining an autograph from Atlas.

Once in their breakout session, the students received advice from professionals in their field, offering advise on everything from the hiring process and workplace effectiveness to career sector support and structures.

“We have so many partners who come to the table because they see the value of preparing them for their future,” said Erik Santos, PUSD Pathways Learning Director. “We really listen to our business partners. When they give us advice, we implement it into the class.”

The program ended with the Diaz brothers, Danny and David, who were depicted in the 2015 Disney movie “McFarland USA,” and sharing their true story of becoming champion contenders, and of the power of teamwork, hard work and respect.

The Mentor Conference was held at the Porterville Church of the Nazarene.