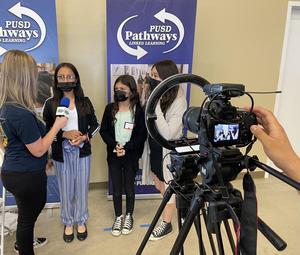 There were 1,320 sixth graders from the surrounding schools that PUSD serves that could check out the menu of 14 Pathways offered by the district on Thursday at the Porterville Fairgrounds Exhibit Hall.

There were 1,320 sixth graders from the surrounding schools that PUSD serves that could check out the menu of 14 Pathways offered by the district on Thursday at the Porterville Fairgrounds Exhibit Hall.

“They're trying to figure out what you want to eat,” said Lambie about the sixth graders being exposed to what Pathway they may choose to attend when they enter high school.

The event focuses on sixth graders to give them a chance over the next couple of years to think about what Pathway they would like to attend so when they enter high school as freshmen they're ready and know what direction they want to take.

The Pathway Expo is virtually entirely run by students who are currently in the Pathways as they were providing hands-on activities and working with the sixth graders on Thursday.

“High school students can show off what they've done,” Santos said. “The teachers just kind of stand back and help when needed but it's student run and student led.”

While there's a shortage of teachers in the country right now, Lambie said the ACE Academy has been an asset when it comes to recruiting potential teachers.

“I wish they had this when I was in high school,” said Lambie about the ACE Academy. “We've got a lot of kids who want to be teachers. The kids just excite me.”

At the Monache Multimedia and Technology Academy exhibit, MTA instructor Bobby Styles talked about how he also liked learning about the other academies. Meanwhile one of his students Alexis Ozuna was giving a chance to a long line of sixth graders to give their thoughts on the Expo in an interview.

MTA students Oscar Martinez and Daniel Corona were also “roving reporters” as they were going around the EXPO interviewing students. “We're going around and trying to find out what their favorite pathway is, what they like the most,” Martinez said.

Styles said MTA freshmen have a chance to decide which way path they want to take in the pathway whether it be in video production or graphic design as sophomores.

Porterville High Academy of Health Science student Mariana Ramos had the chance to attend the Pathways Expo as a sixth grader and she said that experience helped her in deciding what path to take. She and other PAHS students along with sixth graders were participating in a demonstration on how to do CPR. Imperial Ambulance was also there with the PAHS Academy.

Not surprisingly there was a long line of sixth graders waiting to take their turn at the Porterville Military Academy's Academy of Aviation and Leadership Flight Simulators with direction from PMA cadets on how to use them.

Strathmore High Academy of Emerging Agricultural Technologies teacher Anna Allen said she liked the idea of having sixth graders coming to the Expo, giving them a chance to begin to decide on what they want to do. “This is an excellent way to get the kids here to see all the Pathways that are offered to them,” she said.

At the EAT exhibit, sixth graders could see lettuce grown by EAT senior Garren Mitchell, who's in charge of the programs' crop box as part of his senior project. The crop box is used to provide produce for Strathmore High's Farmer's Market. The lettuce was displayed on EAT's hydroponics grow wall.

In addition, EAT also has an aquaponics program in which it raises fish and EAT student Josue Carmona is in charge of that as part of his senior project.

While all the sixth graders toured around to check out all the Pathways they could listen to students Yajari Aguilar, Sara Mitchell and Isabel Burrough on the violin and Cambia Burrough on the cello playing Mozart. The four are students in Harmony Magnet Academy of Performing Arts. Students Miranda Thomason and Isaac Cavazos from the APA dance department were also there to perform.

For more information on the Pathway programs visit pathways.portervilleschools.org