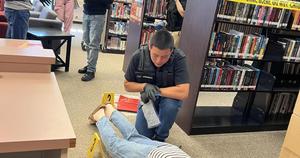 Granite Hills High School students from the Academy of Law Justice and Ethics made a grizzly discovery Thursday morning inside the school library.

Granite Hills High School students from the Academy of Law Justice and Ethics — one of Porterville Unified School District Pathways programs — made a grizzly discovery Thursday morning inside the school library — a dead female body, face down, with blood pouring out from the back of her head, and purse contents spread all around her.

And though a murder at the school library is something no parent would ever want to hear from their child — this situation was different. It was a mock crime scene. In other words, it wasn't real.

And all of it to offer students in LJE the ability to study all aspects of being a detective, said Jane Kisling, LJE Pathway Lead teacher.

Running the scene were Dara Schieler and Ryan Gibson — Career Tech Education instructors, and both alumni of GHHS, 2007 and 2016.

With Matthew Retherford and Levi Clark playing the part of security guards, the two were stationed at the front door of the library to prevent anyone from entering during the investigation of the crime scene.

Inside, seniors helped the freshmen by offering a little guidance

“They won’t tell them the answers but they are there to point them in the right direction,” said Schieler. “We have groups of five or six from separate classes for CTE coming in groups. They are given 20 minutes to look at the crime scene, take evidence and write notes.”

As the first group looked around the scene, they could be heard talking among themselves of the possibilities of what happened.

“But if she was beaten, there would be many more marks,” one student could be heard saying.

As they walked around, the seniors offered pieces of advice, asking them to take photographs to refer to and to look at everything, not just the body.

“Every student has a different job,” said Gibson. “We have a lead detective, a crime scene sketch artist, a CSI technician and evidence collectors.”

As the second group of freshmen entered, Sarah Brown observed the scene from different angles.

“We’ll be taking pictures and analyzing the evidence,” she said.

And as she did, the lead detective Joseph Ramirez could be heard talking to his group, asking them to find more evidence and talking about the scattered items — small lotion bottle, lipstick and mirror — and his thoughts on them. He could be heard asking what object might have been used (for the attack).

The seniors, Penelope Garcia, Matthew Retherford and Levi Clark, could be heard advising the freshmen to look at the blood, not to pick up the actual evidence — which normally would be collected — but to simply take photographs of the evidence.

And when labeling the “blood” swab collected, one must be specific, an instructor said. At which point, Ramirez advised one of his collectors to add the exact side and place of the scalp’s injury.

“Remember. This is the only opportunity you will have so write everything down and take pictures,” Schieler could be heard saying to the students playing the part of detective.

Another student could be heard saying, “Put yourself in the victim’s shoes.”

The “murder in the library” scene is the culmination of what the students have been working on all year, said Jake Bowker, principal at GHHS.

“I really like that the LJE pathway gives a hands-on approach,” said Bowker, adding it offers the model for students to succeed “From the beginning, to all the components, analyzing a murder scene is gruesome but it’s a big part of the industry — learning how to analyze evidence for fingerprints, and separating facts versus speculation.”

Currently, Schieler said, the students don't know the identity of the victim. But on Monday, they will receive more information, including the name of the victim. And a suspect might be named from the fingerprints collected, she said.

The murder doesn't end with the investigation, Kisling said. The mock murder scene will be followed with a mock trial at LJE’s courtroom.

“We’ll eventually arrest someone and maybe next year, we are hoping, to have the actual court trial,” she said.

Bowker praised the judges and attorneys who guide the students at LJE.

“And in the end, the whole scene must convince a jury if the suspect is innocent or guilty,” said Bowker. “We’re making a mock case. It’s a special program to be a part of it. The students love it. There’s drama to it.”

The crime scene continues to stand today, as more students will go through it, before returning to their classrooms to evaluate, write, and discuss the findings.