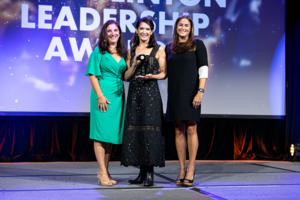 Porterville Unified School District Director of Student Pathways Cynthia G. Brown was awarded this year’s NAF Janet Linton Leadership Award in Dallas this week at the annual NAF Next conference, which is a national gathering of educators, and business and community leaders.

The Janet Linton Leadership award recognizes outstanding academy directors and educational leaders who have impacted student achievement. Brown is one of three NAF leaders from across the nation to be given the award.

“I am so honored to represent Porterville Unified School District and receive this award from NAF,” says Brown. “I am grateful to the many people that are a part of this life changing educational journey. While the award may have my name on it, it is not just about me. This is about so many of the relationships that have been built together with the same vision in mind.”

In 2008, Brown helped begin the first two open-choice PUSD pathways. Shortly after, Brown was named as Director of Student Pathways and she took Pathways district-wide. Within one year, PUSD expanded from the original two pathways on one site to nine open-choice pathways across all high schools. Throughout the years, Brown has led the expansion of the pathways, with the 14th pathway opening in 2018.

"I am very proud of all of Mrs. Brown's accomplishments over the years,” PUSD superintendent Nate Nelson said. “It is because of her leadership that the Pathways program and our students are so successful. This award is well deserved."

Brown stresses the power of career-themed pathways and project-based learning and PUSD has seen high student success as a result. Pathway students outperform students on the local and state level on the California Assessment of Student Performance and Progress, CAASPP. Furthermore, among Pathway students, year after year, the average attendance rate is 98 percent and the graduation rate is 99 percent, both significantly higher than the local, state and national average.

Brown has created a “village” to help carry and sustain the heavy load of work-based learning opportunities for Pathway students. The public and private sector of the Porterville area have worked together under Brown’s leadership to be part of Pathways program. PUSD has 14  advisory boards for each of its Pathways, as well as a district-level broad-based coalition board called the “P8 Coalition.”

NAF, formerly known as the National Academy Foundation, helps to bring education, business, and community leaders together in an effort to make students more college and career ready.